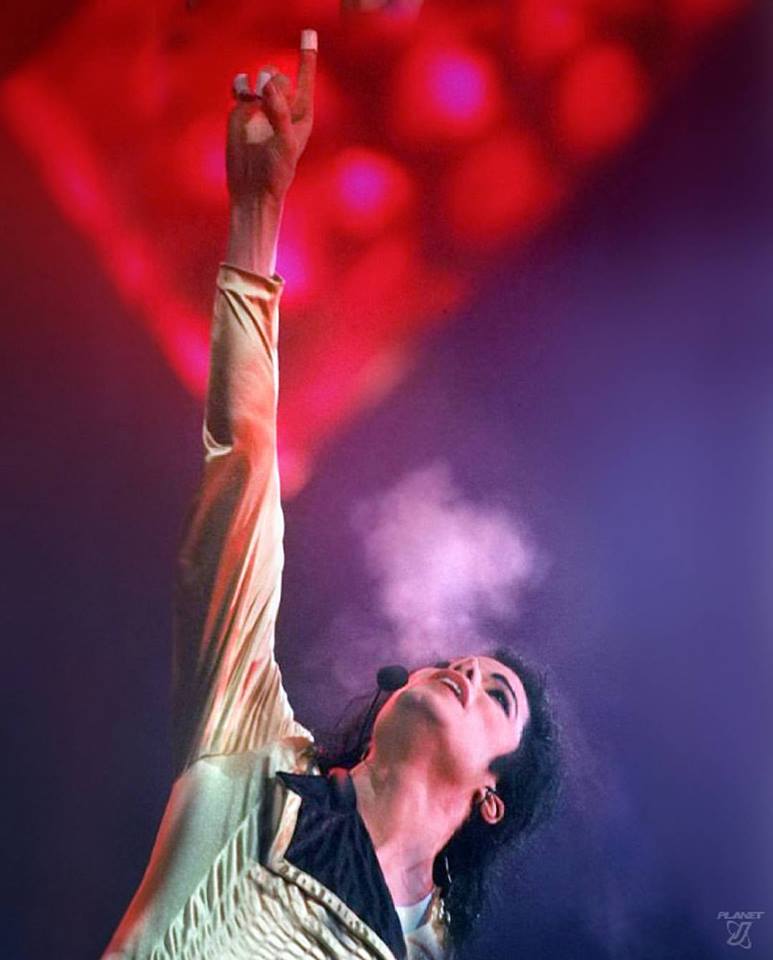 compassion…against injustice and lying and greed.  If people all over the world would do this, it would change the earth.”

~We rise by lifting others~  Robert Ingersoll

~TEACHERS OPEN THE DOOR.  YOU ENTER BY YOURSELF~ 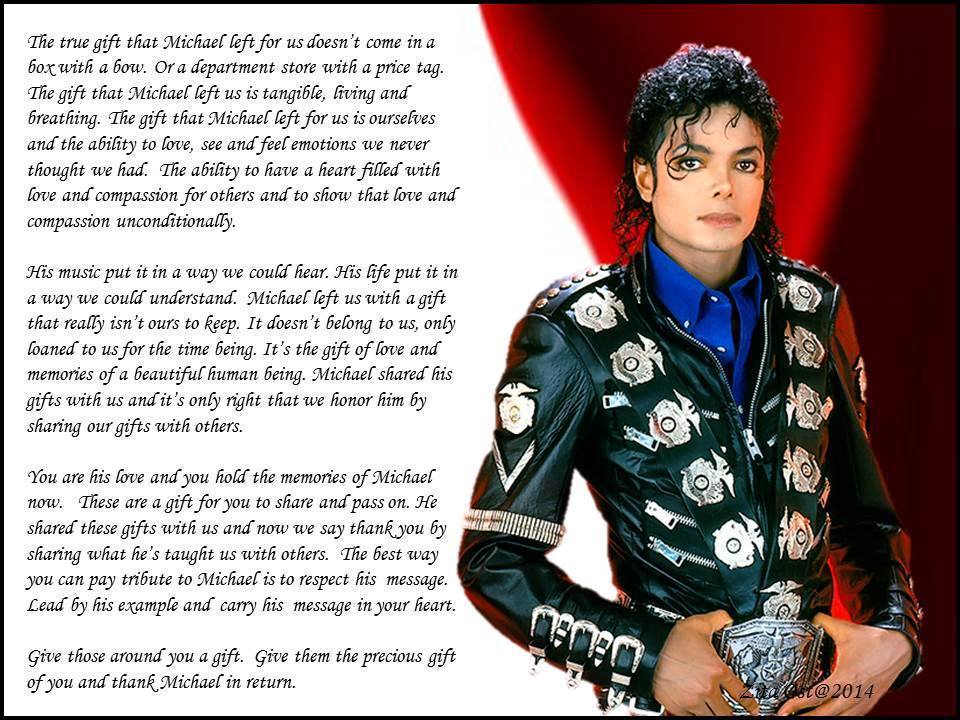 “The connections between Michael and his followers transcend time, distance and circumstances, for their relationship of unconditional love remains as strong and tight as always.”

~A song is a mantra, something you repeat over and over.  And, we need peace.  We need giving.  We need love.  We need unity.  I want the whole world to sing this song:  WHAT MORE CAN I GIVE~ 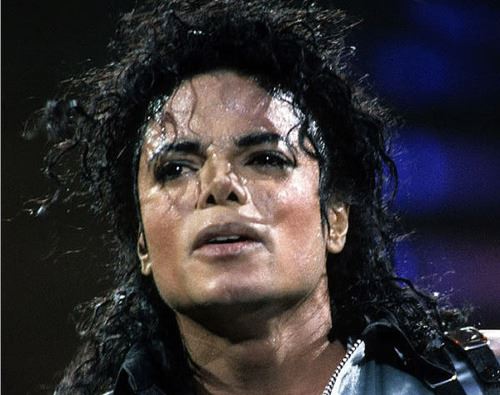 As the world tends to break everyone, we hold onto the hope that many of us are stronger in the broken places…and, that those broken places put us in the right place.  It is God’s work, choosing for us the right place, even if we don’t know it at the time.  We don’t always receive what we are sure we want.  Instead, we are given what we need.  Often asking ourselves:  Why is that a relevant question…our interests aligned, we simply do not stop asking.  Meeting Michael Jackson…no matter what form the contact…causes a chemical reaction that is transformative and purposeful.  Our journey defines this:  KNOWING the truth and GETTING justice are not the same thing.  Our need to put things right echoes from all corners of the planet, often reminding us that we may be knocked down, but we 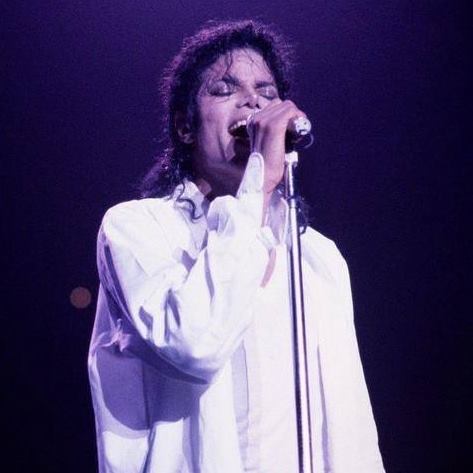 are not destroyed…nor will we be.  Encountering an often repeated statement in the media, “There is nothing good about this guy.”  Wolf Blitzer The Situation Room CNN July 6, 2009, not only do we use our anger, but  pity those who see depravity in normal behavior, thankful we are not inside their minds.  We are determined to change the sound bites and end the seemingly never-ending myths, hoping for a classic blowback that will show the world media agendas, justifying their cynicism as a higher calling.  How are we meant to survive it all?  The answer is clear:  We look to Michael Jackson’s life, artistry and legacy as a guide.

“If DANCING THE DREAM, MOONWALK, his life and lyrics weren’t enough to tell 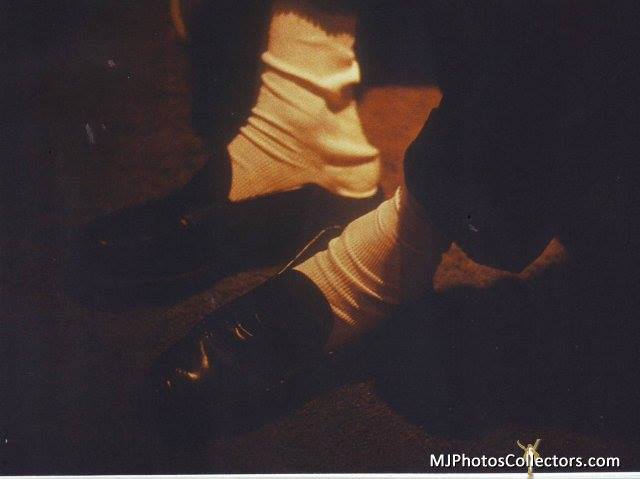 all we need to know, then no book is going to change a hardened heart.”

The entry lies before us.  The teacher is here.  Michael  is meant to survive.  We are 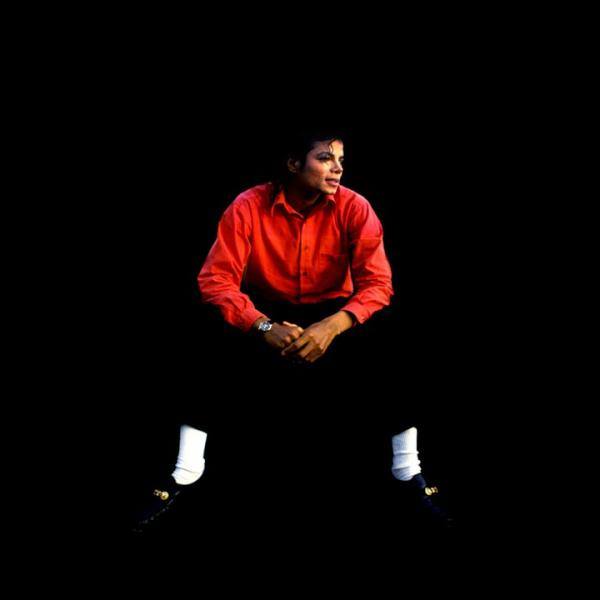 “It’s so inspiring how Michael’s fans, friends and supporters remain inspired to care after so many years.  That is a truly great legacy that should be aspired to.”

This journey we find ourselves passionately devoted to is as unique as the man himself.  Students of history, we realize we can find no other human being as abused, in 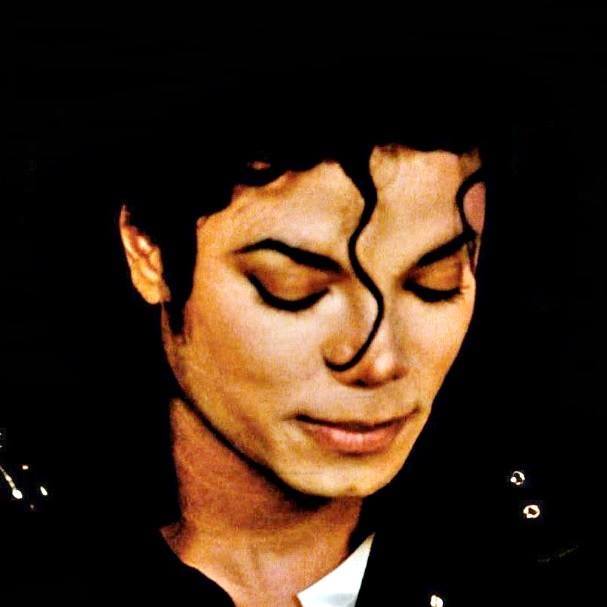 this or any other century.  In the age of instant communication, a lie can spread around the world with the touch of a button…never to be erased.  Without accountability, there is no fear of reprimand.  Opinions become fact, agendas masked, releasing conscience from cut and paste mentality.  Those claiming to be friends, after being shown loving hospitality,  often delight in sharing…causing us to ask:  After spending time with a friend, how many of us returned home talking about their nose, alleged surgeries they might have had, the alleged parentage of their children?

“I’m a great fan of art.  I love Michelangelo.  If  I had a chance to talk to him, or read 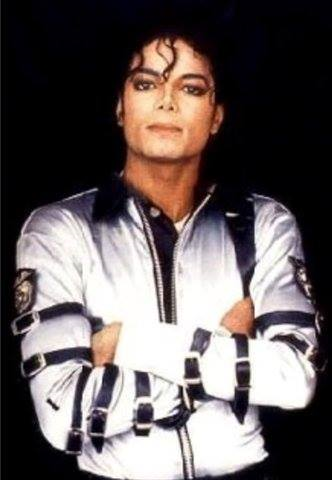 about him, I would want to know what inspired him to become who he is, the anatomy of his craftsmanship, not about who he went out with last night. That’s what’s important to me.”

(What was Oprah’s next question:  “How much plastic surgery have you had?”)

(One wonders, how many other people Oprah asked that question!  And, more importantly, what was HER agenda.  I think we know the answer.)

“We are all familiar with the role of the media in the constant replay of innuendos and false claims’ nauseating proportions, while not paying attention to peace, justice, humanitarianism he was so greatly involved in.” 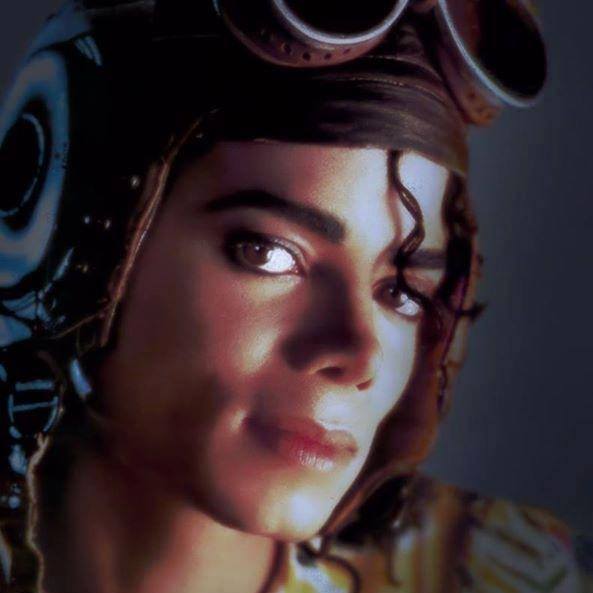 ~I don’t bleach my skin.  They once said I wanted a white kid to play me in a Pepsi Commercial…that is a rumor.

~The Bill Clinton Inauguration rumor…saying I didn’t want to do it, is a false rumor. 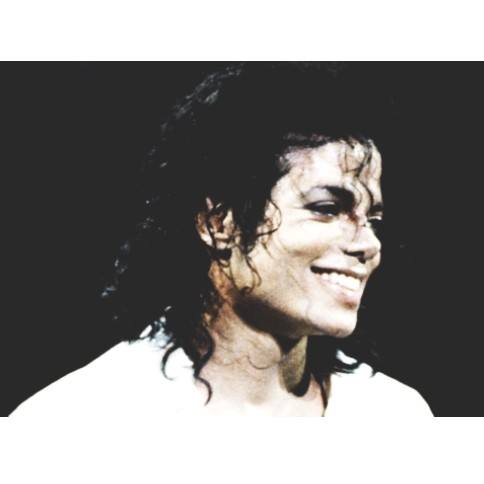 ~DON’T JUDGE A PERSON UNTIL YOU HAVE TALKED  TO THEM ONE ON ONE.

~Jesus said to love children and be like children, be youthful and be innocent and pure and honorable.  He was talking to his Apostles…they were fighting over who was the greatest of them all…and, Jesus said, “Whoever humbles himself like a child is the greatest among you.”  He surrounded himself with children.  That’s how I was raised to believe…to be like that…to imitate that.~

“It pains me to watch the human suffering taking place in the Gulf Region of my country.  My heart and prayers go out to every individual who has had to endure the pain and suffering caused by this tragedy.  I will be reaching out to others within the music industry to join me in helping to bring relief and hope to these resilient people who have lost everything, from the bottom of my heart, to help the victims of hurricane 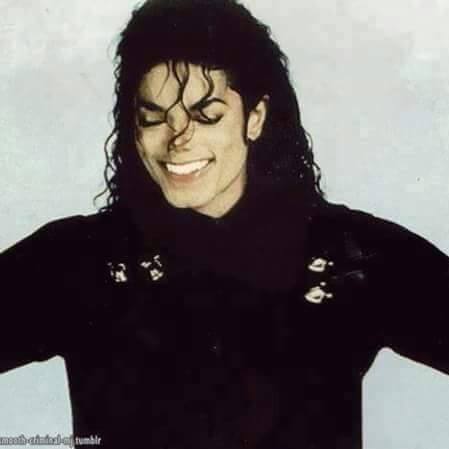 “Whilst Michael’s messages of love and tolerance supercede him, we must also remember his message of truth and resilience in standing up and fighting for what you believe in, no matter who the target and however bleak the outcome may be.  A voice for the voiceless, an answer to the lies…Long may Tabloid Junkie reign, and long may it serve as an example of a man not afraid to speak out.”

~My fans will go down in history for their loyalty, their love, and their strength. 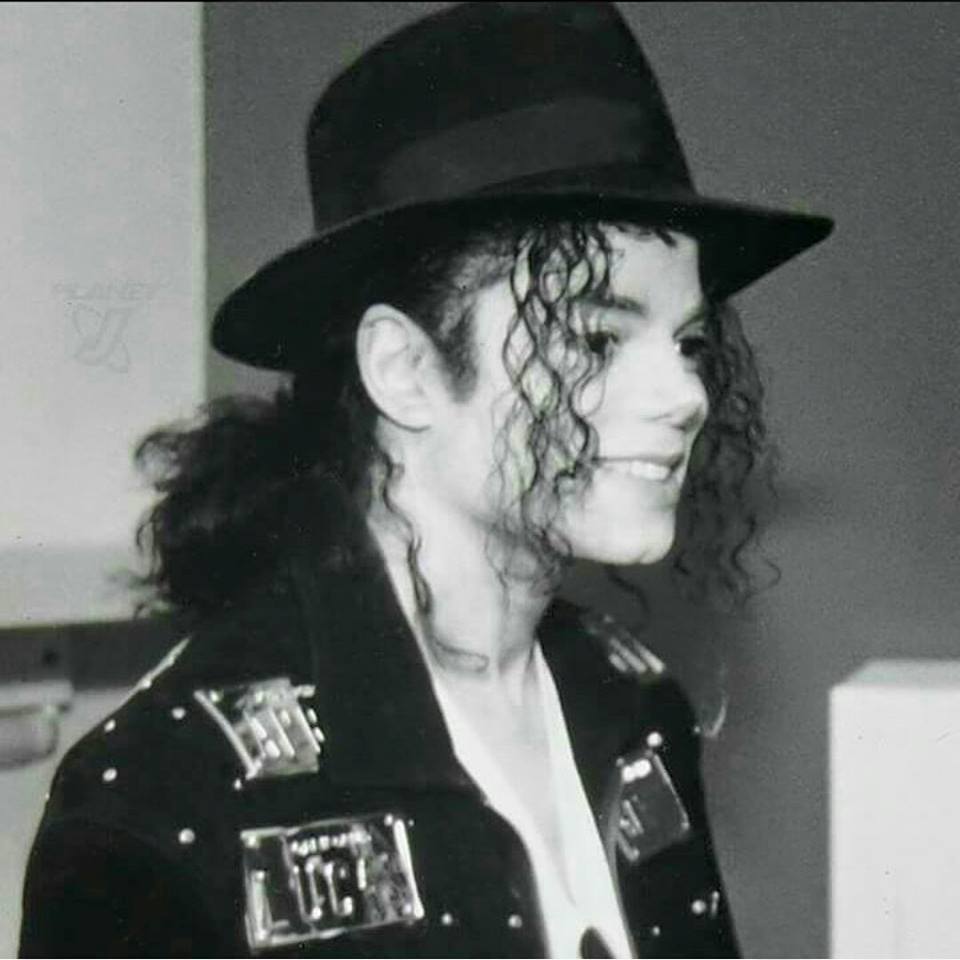 Michael Jackson has taught us to think.  He has taught us to dream.  The world spins on dreamers.  We accept the fact that bad things will continue to happen, strengthened in our certainty that the truth fears no questions.  Our numbers prevent us from being stretched past the point of resilience, grateful to have chosen to enter through Michael’s magical door of unconditional love…happily welcoming all who accept this 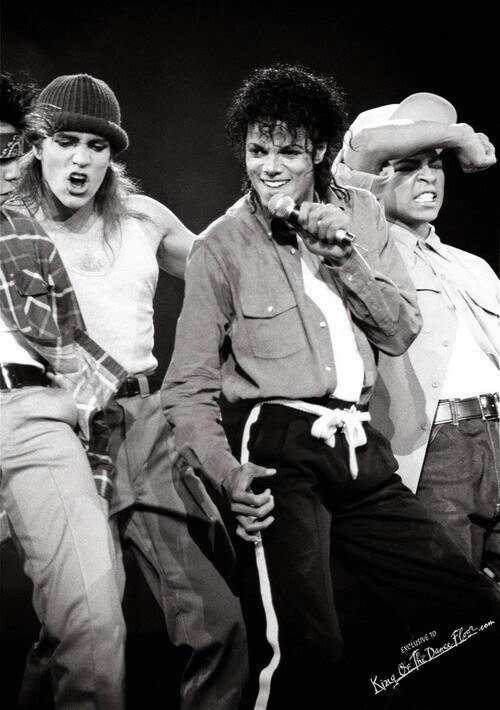 mantra:  When you want to know Michael Jackson…ASK HIM!

Accepting that for a time~an Angel walked among us~ WE PAY MICHAEL FORWARD WITH ALL OUR LOVE!